Vaping | Is This The Answer To Quitting Smoking?

Vaping | Is This The Answer To Quitting Smoking?

When a person starts their recovery journey, they typically look for different ways to live healthier lifestyles. Everything from a person’s diet to their exercise routine and even a change in what over the counter medications someone is taking are all affected by newfound sobriety. Nicotine alternatives and quitting aids come in many forms and varieties and people experience various trial and error until they find the correct path for them.

When it comes to quitting smoking, there are a tremendous amount of ways to go about it. The older route of going cold turkey may seem too daunting for many, which is why science has created other means of quitting such as nicotine patches, lozenges or gum to ease the struggle as you start to withdraw from nicotine. One method that has only existed for the last decade is e-cigarettes or “vaping.” Vaping is a form of ingesting nicotine into the lungs through an electronic device. Since e-cigarettes found their way into your local bodega, they have been thought of as a much safer alternative to the effects we know about traditional cigarettes or cigars. This has driven many people to pick up this new habit in hopes that they will not deteriorate their health from traditional cigarette’s and cigars.

Scientists have been studying the health effects of vaping on humans to check the legitimacy of the claims by the companies that produce them. The problem is, there hasn’t been enough time elapsed to effectively understand the long-term effects of these devices on the body. Only now are we beginning to be able to answer the question, “are e-cigarettes truly a safe alternative to smoking?”

Let’s dive in to answer that question a little more thoroughly:

Remember in health class when you learned that the only true form of safe sex is abstinence? This is also true when it comes to smoking. The safest alternative to smoking is no nicotine. No questions asked. That being said, it may seem nearly impossible to quit without having at least some nicotine in your system to ease the discomfort of withdrawal.

E-cigarette companies make the claim that vaping doesn’t contain the same toxic chemicals as cigarettes, which is why they are the safest alternative. Science has proven in recent years that this just isn’t the case.

According to surgeongeneral.gov, some e-cigarettes contain very harmful substances to the human body, such as:

These alone go against the claim of being a “safe alternative.”

Besides the chemicals, what are some other problems with vaping? 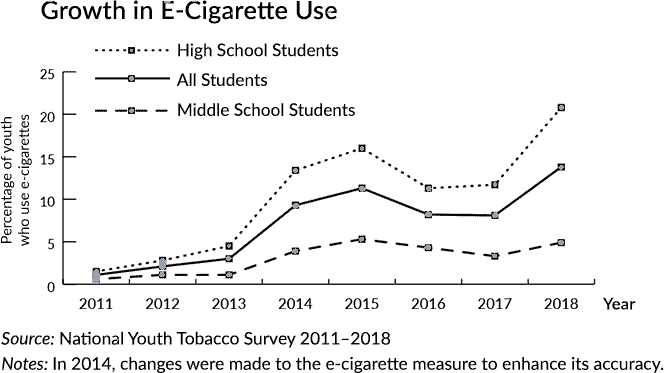 According to sources, vaping directly leads to many people picking up smoking cigarettes. This shows that while it may help many people quit smoking cigarettes, there are some who are starting to smoke who may have never picked it up if it wasn’t for vaping. From 2011-2018, the percentage of youth (middle school and high school students) who use e-cigarettes has risen from between 0-5% to now close to 15%! This is a drastic increase in just 7 years. Nearly 1 in 5 high school students reported having used an e-cigarette in the past month in the year 2018.

Nicotine is an addictive substance. When you are using cigarettes or e-cigarettes, you are ingesting nicotine. After using it for long enough, you will experience withdrawal from not having in your system. Nicotine is also shown to raise your blood pressure and increases your chance of heart attack.

You may also think that vaping is not as addictive as smoking cigarettes. Very plainly, this is not true. In fact, with e-cigarettes, you have more freedom to buy stronger amounts of nicotine to put in your e-cigarette. Nicotine, no matter how it is ingested, is suggested by research to be just as addictive as substances like heroin and cocaine.

So, how can you quit smoking?

There are many alternatives to vaping in order to quit smoking. Some of these may even be free to you. Below are some resources to help you quit smoking cigarettes today:

Both of these websites have tools, tips and resources to start you working towards a healthier lifestyle today. You can also speak to a doctor for more information.

With everything we know about smoking and vaping, the healthiest alternative to either is quitting completely. Without assistance, it can be difficult, but there are resources to help you do so. There is no better day than today to start living a healthier life!